The “Thunder from Down Under” Neil Robertson won the snooker world championship early this morning!

In the match between Mark King and Ricky Walden in the Glasgow Grand Prix it was exciting to the end with King making an amazing recover in the final frame through three necessary snookers to win the match.

John Higgins continued to play great and Shaun Murphy never really had a chance. Murphy fought back a bit during the first session but during the second session Higgins got ahead and from then on the match was pretty much won.

I was busy last evening preparing for tonight’s festivities so unfortunately I missed the Higgins vs Selby match. I’ve always been a fan of Mark Selby though and I’ve found Higgins to be quite dull and boring, but it seems like Higgins really got his act together for this World Championship. It’ll be interesting to see him against Mark Allen, who beat O’Sullivan, in the semifinal.

I’ve been busy the last few days so I haven’t seen any of the Ronnie vs Mark match, but from the article it doesn’t sound like I’ve missed much.

It’s a shame Ronnie is out though, as he’s quite the character and brings some action to the table.

Let’s hope Stephen Hendy has found is his game again.

Quite an exciting match last night between Mark Selby and Ryan Day in the Royal London Watches Grand Prix. Trailing two frames behind Selby managed to catch up only to miss a crucial match-winning red in the last frame leaving it open for Ryan Day to win the match.

Ronnie O’Sullivan has won his first two matches even though he has admitted to playing bad at best and usually playing just poor. So that’s promising for the rest of the tournament!

Ronnie O’Sullivan easily defeated Dave Harold in the final yesterday evening. It wasn’t much of an exciting match to watch, but the semi-final between Ronnie and Ali Carter was the total opposite.

Ronnie was trailing for most of the match and it wasn’t until the final red in the last frame it was decided who was going to go on to the final. They both played fast attack snooker with the average frame time around 10-11 minutes, which means it was fast-paced action from the start to the finish! 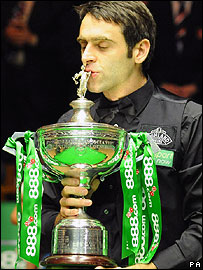 Not that surprising Ronnie won quite easily over Ali Carter in the final.

Ali looked tired and worn out from his hard semi-final against Joe Perry and failed to make use of O’Sullivan’s mistakes. Ronnie on the other hand wasn’t too happy with this game in the final, which wasn’t up to the same standard as when he easily beat Stephen Hendry in the semi-final.

After the match Ronnie again said that he might take a break from snooker. He always says that after the season but so far he’s always been back in the autumn, so we’ll see.

Liang Wenbo became the first Chinese player to reach the quarter-finals at The Crucible as he won 13-12 in an enthralling match over Joe Swail.

It was magic to watch and the final frame was nerve-wrecking. Go see it at the BBC link above!

Now Liang Wenbo will face Ronnie O’Sullivan in an interesting quarter final. Liang’s over-the-top aggressive style reminds me of a young O’Sullivan, who by now is more selectively aggressive and has a brilliant defensive game.